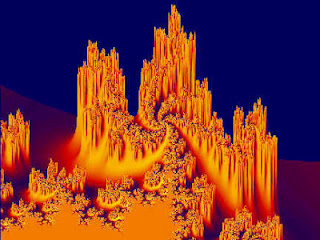 Yesterday, August 17th was an auspicious day for those of us remembering back twenty-five years ago to the day humanity turned the tables on ancient prophet's predictions, setting events into motion that most likely, if not assuredly, changed the course of humanity. 144,000 souls around the world prayed for peace on this day in a celebration called The Harmonic Convergence, catapulting earth and humanity on a new course: A course of peace.
The energies of our planet were set up billions of years ago to support human life up until a certain point, Ancient prophesies have said that by the year 2000 humanity would have pretty much annihilated itself. They supposed that between the years 2000 and 2012 the earth would shut down and no living thing would remain.That's the course we were on before August 17 1987....the course of destruction.  But because light workers from around the globe prayed for peace in all types of celebrations, we saved ourselves.  Our reward? Advancement into the Fifth Age, the Age of Illumination.  We can walk into our ascension without destroying ourselves like we've done with all the other ages before.
For more clarification about this day and the festivals celebrated around the world, I'll share with you a snypet from my book, "Illuminating Crystal," where my character, Dr. David Lange, explains this important day and its ramifications to Crystal Blue, the heroine of my novels in the White Bird series.
Here it is for your reading pleasure, taken from page 157 and 158. And please excuse me for not introducing the scene, but I don't want to spoil it for you if you haven't yet read my book:

He (David) shook his head and looked at the papers for a moment. “Twenty-three years ago, an event occurred that changed the course of humanity. A global convergence for peace where hundreds of people from around the planet converged at the same time globally and united for peace,” he looked up from the paper. “If this hadn’t happened, Crystal, a great disaster would have befallen the planet, an apocalypse; the planet would have by now been almost completely shut down. The convergence worked because we’re still here walking, talking and breathing fresh air.”


David took off his glasses, rubbed his eyes and thought for a moment. “Like other festivals, the Harmonic Convergence started primarily as a celebration of shared values or beliefs. What made the convergence a bit different, however, is that the light worker community came from all over the world, and the uniting beliefs were a mix of the New Age, the Bible and ancient Mayan astronomy. “Because of this celebration, our current situation is different than the ancients predicted.”
“The convergence apparently had its origin in a book written by Jose Arguelles called “The Mayan Factor.” He argued that at a critical time, the prophecies of the Bible, and Aztec and Mayan calendars indicated the world would either begin a new age or be destroyed. If 144,000 self-chosen people called “light workers” were resonating with peace during this important time, worldwide, Arguelles believed the world could be saved from destruction. The catastrophic events that would lead to the destruction of our world in 2012 would be averted.

“This particular ‘shift’ in human consciousness that occurred as a result of the thousands of souls resonating at the same moment in time with the intention of world peace, raised the vibration of our planet and set us on a new course for, well…enlightenment, I guess. We passed a crucial stage and we may have saved our planet from annihilation. I also know that this shift brought you to us—to me. The planet was ready for you to come.”
Crystal raised her eyebrows and shook her head. “The planet was ready for me? Dude, I don’t know.”
“Once the planet began to vibrate at a higher frequency because of the shift, you came in to help with this new chapter in the course of humanity. There is a purpose for this change, Crystal. It’s all part of the awakening process and, ultimately, peace on earth—something that no one ever dared to dream would be possible. The human contract for life on planet Earth changed, and humans will need to begin vibrating at a higher frequency along with the earths.”

So there you have a basic explanation of what happened on this day twenty-five years ago. I remember that day well, having traveled with my mother at 4 a.m. to a rural town twenty miles outside of Minneapolis: The town of Long Lake.  We were greeted by dozens of happy people, setting up tents, sweat lodges, picnics, campfires, and ceremonial circles.   Ed Mc Gaa, Eagle Man,  a member of the Oglala Lakota and author, was with us that day and I had an experience I'll never forget.
Being new to the world of metaphysics and all things "New Age," I'd had little experience with  group ceremonies where we stood in a circle holding hands, chanting and swaying.  But, knowing that the day was extremely important, one I'd never be able to replicate, I jumped in and grabbed hold of my neighbors hands.  Ed, wearing a ceremonial war bonnet, stood in the center of our circle.  I don't recall the words he said, or what he held in his hands, but after a few moments the wind picked up and a huge gray cloud came soaring in from the east.  Now these were no ordinary clouds, they were heavy, gray and angry, but Ed told us to hold hands and not let go.  As the wind screamed around us, and the clouds passed over, the air began to change and I looked up. What I saw brought shivers up and down my spine: Dozens of feet over our heads, two birds, I think they were eagles, flew in a tight circle.  By now, everyone was looking up and the beautiful white birds continued circling for at least 3 maybe 4 minutes before flying away.  Then the clouds broke and the sky was perfectly clear.
That was probably the most profound thing I've ever witnessed and impressed upon me so strongly that I carried it with me, weaving the mystical experience into my books.  After all, I did title the series of my book, the White Bird series.
So now, twenty-five years later, I'm writing about that day, remembering and hoping that many more of you remember what you did on August 17, 1987.
Congratulations! We did it!
Blessings to all of you,
Paula

Image borrowed from: http://www.thewildrose.net/harmonic_convergence.html
Posted by Unknown at 8:38 PM No comments: 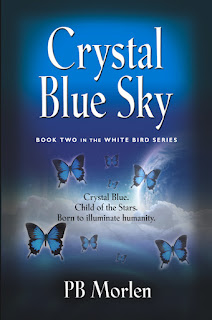 Hello!
I am not going to beat around the bush, making excuses as to why it has taken me so long to post a new blog, but let's face it, life is busy.  Okay, apology was made, sort of, and now we can get on with new business.  But I will say this, I will never allow such a long stretch of time occur between posts, it's just that everything that I needed to say, I wrote in my new book! And here it is: Book II in the "White Bird" series, "Crystal Blue Sky."
For today, I'll write up a quick synopsis for you and download a free book excerpt and book trailer.  I'll also download a PDF with the cast of characters, including of course characters from Book I, "Illuminating Crystal."
I will also add, that I am babysitting a three-week-old kitten that my daughter is nursing since it lost its mama, and it is insisting on sitting on my chest as I type, so if there are any typos, blame it on baby Bently.


Crystal Blue has learned her fate and begins the mission she was born to fulfill: She must travel the globe and walk between worlds to unveil the sacred knowledge of the ancients so humanity can ascend into the Fifth Age.
Unfortunately, the morning she and friend David plan to leave for South Dakota, Crystal awakens to find two serpentine tattoos around her neck, and a big, black dog named Wyndon lying by her bed.  Strangely enough, she has no idea where either has come from.  Feeling like someone has messed with her memory or played a trick on her, and still unnerved by her recently acquired blue-streaked hair; she’s now a bit paranoid and prickly.
Nonetheless, with her dog and friend by her side, she sets out to learn the secrets of the Oglala Lakota, ultimately strengthening her ghost, healing her past and cleansing her spirit with fire and water, all necessary to prepare her for the mission some fear may claim her life.
While Crystal walks between worlds, her mysterious and divine powers dawn bright and clear when she meets two of her soldiers, the man she loves, and many others, some welcome…some not.  Surprisingly, the journeys are exciting and she begins to accept her once-dreaded mission with newfound anticipation, knowing deep in her bones that her soldiers will be at her side when trouble draws near.
But something happens on an island in the North Pacific, something she did not expect.  One of her soldiers has fallen and a sacrifice must be made.  To save the life of this soldier, another’s must be forfeit, and the loss will break Crystal’s heart because he will be left behind and all alone.
Can she do this? Can she abandon him? Or will she sacrifice her mission to save him?

Here is the Book Trailer for your Review:

Visit my website www.pbmorlen to download the Free Book Excerpt from the home page.  There you will also find the cast of characters for both books to download into your own computer for reference when you begin reading "Crystal Blue Sky."

Thank you so much for reading my books, and if you haven't yet read them, thank you anyway for your interest.  Look forward to a post from me next Monday, which will be my regular posting days from here on out, I will update you all on my summer travels and workshops.
I hope you have a grand week, filled with laughter, compassionate interactions with earth, animals and humanity, and especially with yourself.
Namaste,
Paula